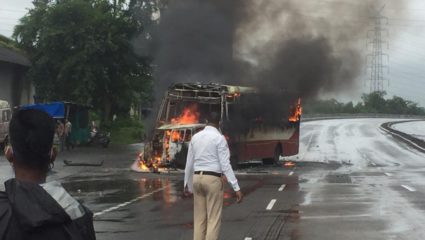 Jharkhand: The festival of Diwali became a time for drivers and conductors. One such incident has come to light in Jharkhand, on the occasion of Diwali, the driver and conductor lit lamps in the bus and after a while slept in the bus, meanwhile the bus caught fire. In which both died painfully by burning. The fire was so fierce that both of them did not get a chance to escape.

According to the information, on the occasion of Diwali in a bus parked at Khadgarha bus stand in Ranchi, the driver and conductor lit a lamp and slept. Both died in the fire. As soon as the information was received, the police and the fire brigade reached the spot, both of them were taken out and taken to the hospital. Where doctors declared him brought dead. The bodies of both have been kept for post-mortem.

Last night, a fire broke out inside the bus due to lighting of earthen lamps, due to which two people sleeping in the bus died. The deceased has been identified as the driver and helper of the bus: Ranchi Police, Jharkhand

Ranchi Police said that the fire broke out due to lighting of earthen lamps inside the bus last night due to which two people sleeping in the bus died. The deceased were identified as the driver and helper of the bus, while in one case a level-2 fire broke out in a godown on Sakinaka-Khairani road in Mumbai. Eight fire tenders are present at the spot to douse the fire. No casualties have been reported so far.